5 IMAGES:
AND See below for more info on this historic outfit!

ITEM #7557
Please use this number to order 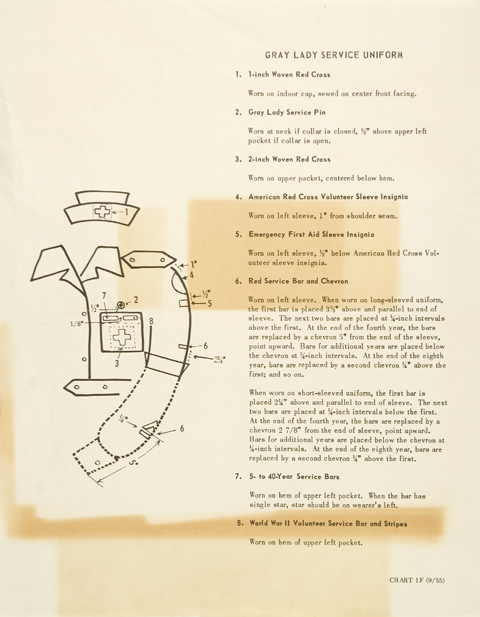 The term "Gray Ladies" refers to American Red Cross volunteers who for many years provided friendly, personal services of a non-medical nature to sick, injured, and disabled patients in American hospitals, other health-care facilities, and private homes. Their work ranged from writing letters, reading, tutoring, and shopping for patients to serving as guides to visitors and as hostesses in hospital recreation rooms and at information desks. Gray Ladies also provided hospitality services in Red Cross Blood Centers and joined forces with other Red Cross workers in caring for disaster victims.

The Gray Lady service began in 1918 at the Walter Reed Army Hospital in Washington, D.C. Women volunteers acted as hostesses and provided recreational services to patients, most of whom had been injured during World War I. The women wore gray dresses and veils as uniforms and the soldiers affectionately called them "the gray ladies." The name stuck although the service did not become officially known as the Gray Lady Service until after World War II. Originally it was called the Hostess and Hospital Service and Recreation Corps of the American Red Cross. The name was shortened to Hospital and Recreation Corps in 1934 and changed to Gray Lady Service in 1947. Some men also enrolled in the Service and were called the "Gray Men."

Gray Lady Service spread to other hospitals around the country, both military and civilian, in the 1930s as health needs grew during the Depression. The service reached its greatest strength during World War II when almost 50,000 women served as Gray Ladies in military and other hospitals throughout the United States. Following the war, some Gray Ladies also served in U.S. military hospitals overseas.

Although their numbers declined after the war, Gray Ladies continued to maintain a distinctive presence in American hospitals until the late 1960s when the different volunteer branches of the Red Cross were discontinued in favor of a unified concept of the Red Cross Volunteer. The Gray Lady Service, as such, disappeared and volunteers who performed its traditional functions were simply called members of the Red Cross Volunteer Services. In keeping with this new policy, a universal blue uniform replaced the distinctive ones that had identified Gray Ladies and volunteers in other Red Cross services for many years. Despite these changes, some former Gray Ladies continued to use the apparel they had worn so proudly for nearly 50 years and Red Cross leadership made no effort to ban this practice among those longterm volunteers. Even today a few chapters continue to call some of their volunteers "Gray Ladies" who perform the traditional functions of the bygone service.